Thirteen Months in the Rebel Army 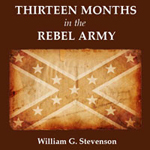 Thirteen Months in the Rebel Army

William G. Stevenson was a Kentuckian, loyal to the Union, who endured 13 months of enforced service in the Confederate army.

In the introduction, he writes:

If I should seem to you to speak too favorably of individuals or occurrences in the South, I beg you to consider that I give impressions obtained when in the South. If my book has any value it lies in this very fact, that it gives you an interior view of this stupendous rebellion, which can not be obtained by one standing in the North and looking at it only with Northern eyes.

I invite you to enter with me upon the Southern service; you can stop when you please, or go with me to the end, and give a huzza as you see me escape and reach the loyal lines.

Thirteen Months in the Rebel Army
Listen to an excerpt