The Last Days of General Grant 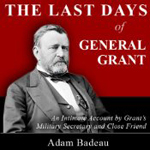 The Last Days of General Grant

This is a poignant and intimate account of General Ulysses S. Grant’s last days, written by Adam Badeau. Badeau volunteered for military service in the United States in 1862, early in the Civil War. He was appointed military secretary to General Grant, with the rank, first of Lieutenant-Colonel and ultimately, colonel. He was with Grant throughout the Wilderness and Appomattox campaigns, and remained on his staff until his retirement from the army in 1869, with the full rank of captain and the brevet rank of Brigadier-General. He accompanied General Grant on his post-Civil War tour around the world. They remained close friends for the remainder of Grant’s life.

His character at bottom was like that of other men. He loved and hated; he suffered and enjoyed; he appreciated what was done for and against him; he relished his fame and his elevation, he felt his disappointments and his downfall; his susceptibilities were keen, his passions strong; but he had the great faculty of concealing them so that those closest and acutest could seldom detect their existence. I sometimes wondered whether he was conscious of his own emotions, they were so completely under control; but they were all there, all alive, all active, only enveloped in a cloak of obstinate reserve and majestic silence which only at the rarest intervals was torn aside by misfortune or lifted for a moment to a friend.

The Last Days of General Grant
Listen to an excerpt