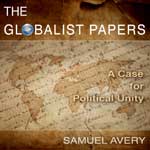 The Globalist Papers: A Case for Political Unity

The nation-state remains the political paradigm of the current era even as nuclear weaponry, global communications, climate change, and the global economy make it obsolete. The Globalist Papers shows the need now for unity among the nations of the world much the same way the Federalist Papers showed the need in the 1700’s for unity among the states of America. This book is not limited to political history. It explores the spiritual and psychological dimensions of the transition away from nationality. Why is it more important now to be national than human, and how will it be possible for the transition to take place?

The Globalist Papers
Listen to an excerpt

Samuel Avery (AUTHOR) was raised near New York City and educated at Oberlin College and the University of Kentucky. He has written a series of books on the relationship of physics and consciousness, including Buddha and the Quantum. He is passionate about peace and environmental issues, having written The Pipeline and the Paradigm: Keystone XL, Tar Sands, and the Battle to Defuse the Carbon Bomb. Samuel lives with his wife on a small farm outside Louisville, Kentucky, with his wife, Bonnie. He spends his time gardening, building, writing, and operating a solar installation company.