The Quantum Screen: The Enigmas of Modern Physics and a New Model of Consciousness 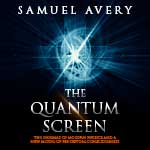 
The Quantum Screen asks, what is the connection between physics and consciousness?

At first glance they appear to be polar opposites. Physics is concrete and verifiable; consciousness is mysterious and subjective. Physics can be demonstrated; consciousness cannot. Both physics and consciousness are real, but there seems to be no connection between them. This produces a duality: two truths, both valid, without any apparent connection. The duality is a division between spirit and matter, between mind and body, between religion and science – the essential neurosis at the core of our civilization. As a society, we have never resolved the difference between what we experience in consciousness and what we think actually exists in the world.

In The Quantum Screen, Avery presents a paradigm-shifting model of perceptual consciousness and of the world – a model he calls the quantum screen.

What is the importance of a model like this? The quantum screen audiobook presents a scientifically rigorous picture of the essential oneness of spirit and world. It is the oneness of all things. Not a mere concept or belief, it is a direct vision available both intellectually and experientially. If this model proves a useful way to understand human experience, it will have a profound effect on how we understand ourselves in relation to nature, and to each other.

Samuel Avery holds a BA in Religion from Oberlin College and an MA from University of Kentucky. He has taught university courses in American History, European History, and American Government. Avery has practiced meditation daily for more than forty-five years. He has written a series of articles and books on the relationship of physics and consciousness to each other, including the books Buddha and the Quantum and The Dimensional Structure of Consciousness.