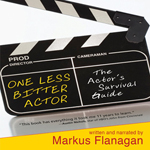 Nothing is more frustrating than talent unrealized, and every actor struggles with bitterness when they aren’t working to their full potential. One Less Bitter Actor offers sage, pragmatic, anxiety-calming advice on how to succeed in acting from one who has. Markus Flanagan offers encouraging, highly useful pointers on such vital matters as:

• How do you combat getting typed?
• Understanding the people you are auditioning for
• Bad habits to avoid in the audition waiting room
• The two deadliest questions you may be asked before starting your reading
• What are they looking for in the call back?
• Dealing positively with rejection
• Finding the spirit to go on

What others have said about One Less Bitter Actor:

“Save yourself five years of learning the hard way and read this book. If I could I’d make it required reading for everyone who dreams to be, was, or is a member of Screen Actors Guild.”
—Melissa Gilbert, Screen Actor’s Guild President 2000-2004

“This book is everything it took me 11 years to learn.”
—Austin Nichols, star of HBO’s John from Cincinatti

Simply a wonderful book! For learning to deal with rejection, this book is a must read.
—Jerry Hall, actress

One Less Bitter Actor
Listen to an excerpt

Markus Flanagan (AUTHOR & NARRATOR) has never needed to hold a day job throughout his 20-year acting career. Right out of acting school he starred in Biloxi Blues alongside Matthew Broderick. His first TV pilot audition landed him a series with George Clooney. So far he’s starred in 3 prime-time series, made 50 guest TV show appearances, and acted in 10 feature films, 5 stage plays and 5 movies of the week. He lives and teaches acting in Los Angeles.

Markus Flanagan on IMDB
You can get a print edition of this book from Sentient Publications.