Transcendence of the Western Mind 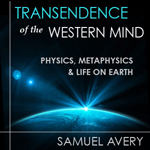 Transcendence of the Western Mind:  Physics, Metaphysics & Life on Earth

What is consciousness? Transcendence of the Western Mind presents an understanding of life that transcends matter. More importantly, it transcends the difference between what you are and what I am. Despite its reliance on what is known through Western Science, it is a transcendence of the Western understanding of reality. It does not begin with a world and then try to figure out how life evolved within it; it begins with life and extrapolates where the world came from.   Written by Samuel Avery, author of the popular audiobook Buddha and the Quantum.

Transcendence of the Western Mind
Listen to an excerpt

Samuel Avery (AUTHOR) holds a BA in Religion from Oberlin College and an MA from University of Kentucky. He has taught university courses in American History, European History, and American Government. He has practiced meditation daily for forty-three years.  Samuel has written a series of articles and books on the relationship of physics and consciousness to each other, including the books Buddha and the Quantum and The Dimensional Structure of Consciousness.