The Physics of Angels 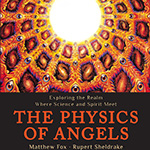 The Physics of Angels: Exploring the Realm Where Science and Spirit Meet


“Matthew Fox might well be the most creative, the most comprehensive, surely the most challenging religious-spiritual teacher in America.“—Thomas Berry

“Rupert Sheldrake continues to chart a new course in our understanding of the non-local mind that connects all of us.“—Deepak Chopra

Many people believe in angels, but few can define these enigmatic spirits. Now visionary theologian Matthew Fox and acclaimed biologist Rupert Sheldrake—pioneers in modern religious thinking and scientific theory—launch a groundbreaking exploration into the ancient concept of the angel and restore dignity, meaning, and joy to our time-honored belief in these heavenly beings.

As a spiritual theologian, he has written 30 books that have been translated into 48 languages and have received numerous awards. Among them are Original Blessing, The Coming of the Cosmic Christ, A Spirituality Named Compassion, The Reinvention of Work, The Hidden Spirituality of Men, and Christian Mystics. Fox is a recipient of the Abbey Courage of Conscience Peace Award (other recipients being the Dalai Lama, Mother Teresa, Ernesto Cardenal and Rosa Parks); the Ghandi King Ikeda Award; the Tikkun National Ethics Award; and other awards.

Rupert Sheldrake is a biologist and the author of more than 80 scientific papers and ten books. He has studied rain forest plants, developed a new cropping system widely used by farmers and has done research on developmental and cell biology. He has also investigated unexplained aspects of animal behaviour, including how pigeons find their way home, the telepathic abilities of dogs, cats and other animals, and the apparent abilities of animals to anticipate earthquakes and tsunamis. He subsequently studied similar phenomena in people, including the sense of being stared at, telepathy between mothers and babies, telepathy in connection with telephone calls, and premonitions. Although some of these areas overlap the field of parapsychology, he approaches them as a biologist, and bases his research on natural history and experiments under natural conditions, as opposed to laboratory studies.