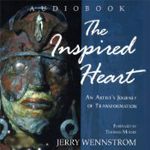 This is the extraordinary story of an artist’s daring exploration into the source of his creativity. In the late 1970s, Jerry Wennstrom was a rising star in the New York art world when he decided that the ultimate creative leap was to destroy his large body of art, give away all of his possessions, and spend the next 10 years wandering, seeking, listening, and trusting God to take care of him. “It was a powerful, holy experience that left me shaken and empty, but exhilarated,” says Jerry of the destruction of his art. Mindful that he was choosing a strange and dangerous way, he questioned his own sanity and the existence of any higher power. Ultimately, he came to the simple, yet radical understanding that every moment in life requires the artist’s creative attention. And with that new perspective, he was able once again to create art without worshiping it as a false idol.

Says Wennstrom, “In the process of letting go, there was a slow build-up to that most important leap. I experienced it as a leap into ‘being,’ rather than the ‘doing’ of creating art, or the expression of being through my art. I let go of everything I thought was most ‘me.’ I felt like I was making a leap into a new relationship with the most direct and creative expression I could give myself to.”

The Inspired Heart tells of a life lived by the singular requirement of Grace—to remain fearlessly attuned to the heart. It is an upside-down perspective, where what is generally most sought after is relinquished, and conscious entry into uninhabitable terrain reveals a remarkable truth. Wennstrom sees no event as out of place in his world, where anything, from street-corner violence to the gentleness of a stranger, can become a blessing.

The main text of the audiobook is read by the author and is interspersed with interesting voices reading the different parts of the book.  The uniquely original music that subtly weaves its way throughout the recording is performed by musician and poet Steven “Muddy” Roues.

I’m sure that many people will find comfort and inspiration in this book. Jerry is able to describe a spiritual journey outside of any ancient tradition or modern system, and I trust that originality. He avoids the many hollow words that sometimes enter contemporary spiritual thought and embodies the idea that you can be fully spiritual and fully secular at the same time.
— from the Foreward by Thomas Moore

The Inspired Heart
Listen to an excerpt

Jerry Wennstrom (AUTHOR & NARRATOR) says “I don’t have much of an impressive bio. All I could do was paint, and because there was nothing else that I could do very well, painting was what I most identified with as a human being. It didn’t hold though, did it? I let it all go, became nothing, and found everything. I do have an AA degree, for those interested in my minimal credentials.”    He lives on Whidbey Island in Washington state, with his wife, Marilyn and has produced a large new body of art.

Jerry’s website:  In the Hands of Alchemy the Way of Trust and Transformation