The Heart of a Soldier 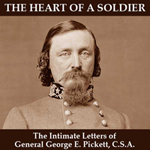 The Heart of a Soldier: The Intimate Letters of General George E. Pickett, CSA

These are the passionate and poignant letters from General George E. Pickett, C.S.A. written to his wife, Sally. These letters reveal intimate details of Pickett’s personal life, as well as his incredible accounts of Civil War battles and personalities. A must-listen for any Civil War buff!

The Heart of a Soldier
Listen to an excerpt

George Pickett (AUTHOR) was a United States Army officer who became a general in the Confederate army during the American Civil War. He is best remembered for his participation in Pickett’s Charge, the futile and bloody assault on the final day of the Battle of Gettysburg.

Tracy James (NARRATOR) is an accomplished actress, author, musician, songwriter and voice over artist. She has sung with the likes of Ric Ocasek of the Cars and Nile Rogers of Chic. She has released seven CD’s of her original music.