The Big Bang, the Buddha, and the Baby Boom 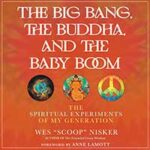 The Big Bang, the Buddha, and the Baby Boom

Join “Scoop” Nisker on a wild ride from West to East and back in his quest for true self and enlightenment. Combining the best elements of memoir and social commentary, Nisker shares his own story to illuminate the spiritual hunger of modern America. His journey begins in Nebraska as the only young man in his small town to be Bar Mitzvah’ed, through the heyday of the Beats and hippies in the Bay Area from his vantage point as a high-profile newscaster, the birth of the environmental movement, and the social and spiritual blossoming of the West.

This is a personal, guided tour of the outer and inner movements that joined together into today’s mindfulness movement, written by one of the leaders of both.

Wes (“Scoop”) Nisker, born in 1942, is an author, award-winning broadcast journalist, renowned Buddhist meditation teacher, and performer. The son of Polish Jewish immigrants, Wisker grew up in the only Jewish family in his Midwestern hometown.

His three-decades-long broadcasting career began in the late 1960s at San Francisco’s original free-form radio station KSAN, where his popular, unconventional radio features included this traffic report: “People are driving to work to earn the money to pay for the cars they’re driving to work in.” In the 1970s he worked at KFOG, where he coined the catchphrase, “If you don’t like the news, go out and make some of your own,” and was nicknamed “Scoop” by Abbie Hoffman while covering the Chicago Seven Trial.

Wisker has published five highly acclaimed books, including the enduring classic The Essential Crazy Wisdom. He is the founding co-editor of the international Theravada Buddhist journal Inquiring Mind. A resident of Oakland, California, he teaches at Spirit Rock Meditation Center in Marin County.