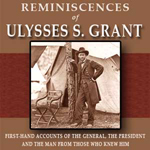 Reminiscences of Ulysses S. Grant:  First-hand Accounts of the General, the President and the Man from Those Who Knew Him

Lt. General Ulysses S. Grant (born Hiram Ulysses Grant), 1822 – 1885, was a military commander during the American Civil War and post-war Reconstruction period, and later, President of the United States (1869–1877). Grant began his lifelong career as a soldier after graduating from the United States Military Academy at West Point in 1843. He earned the nickname “Unconditional Surrender Grant” for his relentless tactics and dedicated leadership during the Civil War. In 1863, President Abraham Lincoln promoted him to the rank of lieutenant general and gave him charge of all of the Union Armies. Under Grant’s command, the Union Army defeated the Confederate forces and ended the American Civil War.

These are personal reminiscences of Grant which allow us to peer back in time to see him through the eyes of those who knew him. Some of the anecdotes describe brief encounters with Grant, while others are are from historically prominent men who knew Grant well. What they have in common are the intimate details that reveal the personality and character of General Grant.

Reminiscences of Ulysses S. Grant
Listen to an excerpt