The Learning Edge: A Conversation with Chris Mercogliano and Steven Harrison 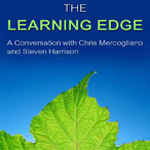 This recording is a frank and fascinating conversation between Chris Mercogliano and Steven Harrison, two inspiring visionaries in the alternative education field. Chris was a teacher at the Albany Free School for 35 years and has been featured on National Public Radio’s “All Things Considered.” In this dialog, he shares his experiences teaching at The Albany Free School and discusses some of the topics explored in his newest book, In Defense of Childhood: Protecting Kids’ Inner Wildness.  Steven Harrison is one of the founders of The Living School in Boulder, Colorado and author of several books including The Happy Child: Changing the Heart of Education.

The dialog is followed by an interview with Chris Mercogliano by Connie Shaw.

Chris Mercogliano was a teacher at the Albany Free School for 35 years and stepped down as director in June, 2007 to concentrate on writing and speaking about non-controlling education and childrearing. His essays, commentaries and reviews have appeared in numerous publications, as well as in four anthologies: Challenging the Giant, Deschooling Our Lives, Creating Learning Communities, and Field Day: Getting Society Out of School. He is also the author of Making It Up As We Go Along, the Story of the Albany Free School, Teaching the Restless, One School’s Remarkable No-Ritalin Approach to Helping Children Learn and Succeed, How to Grow a School: Starting and Sustaining Schools That Work, and In Defense of Childhood: Protecting Kids’ Inner Wildness.

Steven Harrison is an international speaker on the topics of consciousness, human development, relationship and alternative education. He is the author of Doing Nothing, The Happy Child and What’s Next After Now? Post-Spirituality and the Creative Life among other books.