Failure: Why Science Is So Successful 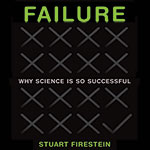 Failure: Why Science Is So Successful


“If there is any justification for man’s ability to overcome his own
limits of reason, ‘FAILURE’ stands as a shining example.
– New York Times Book Review

The general public has a glorified view of the pursuit of scientific research. However, the idealized perception of science as a rule-based, methodical system for accumulating facts could not be further from the truth. Modern science involves the idiosyncratic, often bumbling search for understanding in uncharted territories, full of wrong turns, false findings, and the occasional remarkable success.

In his sequel to Ignorance, Stuart Firestein shows us that the scientific enterprise is riddled with mistakes and errors—and that this is a good thing! Failure: Why Science Is So Successful delves into the origins of scientific research as a process that relies upon trial and error, one which inevitably results in a hefty dose of failure. In fact, scientists throughout history have relied on failure to guide their research, viewing mistakes as a necessary part of the process. Citing both historical and contemporary examples, Firestein strips away the distorted view of science as infallible to provide the public with a rare, inside glimpse of the messy realities of the scientific process.

An insider’s view of how science is actually carried out, this book will delight anyone with an interest in science, from aspiring scientists to curious general readers. Accessible and entertaining, Failure illuminates the greatest and most productive adventure of human history, with all the missteps along the way.

Stuart Firestein (AUTHOR) is the Professor and Chair of the Department of Biological Sciences at Columbia University, where his highly popular course on ignorance invites working scientists to come talk to students each week about what they don’t know. Dedicated to promoting science to a public audience, he serves as an advisor for the Alfred P. Sloan Foundation’s program for the Public Understanding of Science and was awarded the 2011 Lenfest Distinguished Columbia Faculty Award for excellence in scholarship and teaching. He was also recently named an AAAS Fellow.

Paul Aulridge (NARRATOR) won AudioFileMagazine.com’s “Earphones Award” in 2014 for his narration of The Legend of Ron Anejo. When not reading, he can be found fixing computers and arguing with strangers on the Internet.