Doctors on the Edge 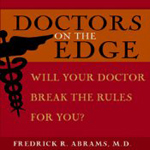 Doctors on the Edge:  Will Your Doctor Break the Rules For You?

This audiobook exposes some of the hardest decisions to be made in a profession in which people’s bodies and souls are laid bare. Doctors on the Edge is the account of doctors who are faced with wrenching moral dilemmas, uninvited and unexpected dilemmas that are thrust upon them. Law, medicine, and morality-sometimes complementary and sometimes conflicting-intrude on in the daily practice of medicine. In gripping stories that often including life-and-death decisions, doctors maneuver the ambiguities, subjectivity, and essential principles of medical ethics.

Each chapter is a true account of physicians who lied, betrayed confidences, or broke the law to bring about what they believed was best for their patients.

Fredrick R. Abrams is a Denver physician who specialized in obstetrics and gynecology for over forty years and served as chair of the Ethics Committee of the American College of Obstetricians and Gynecologists. In his own medical practice, the author has encountered many of the situations in the book.

Doctors on the Edge
Listen to an excerpt

Fredrick R. Abrams, M.D (AUTHOR & NARRATOR) received his medical degree from Cornell University and for over forty years specialized in obstetrics and gynecology. At Rose Medical Center in Denver, he founded the first center for the study of ethical issues in a community-hospital setting in the U.S.

Dr. Abrams was Director of the Colorado Governor’s Commission on Life and the Law. He has given over 1,500 workshops, lectures, and conferences on medical ethics. As former chair of the Ethics Committee of the American College of Obstetricians and Gynecologists, he wrote the guidelines for its 25,000 members. He has served on numerous hospital ethics committees and has taught biomedical ethics to doctors, nurses, social workers, lawyers, and others.

The author has been published in Saturday Review, The New England Journal of Medicine, The Journal of the American Medical Association, and many other periodicals.

You can get a print edition of this book from Sentient Publications.