Dimensions Within: Physics and the Structure of Consciousness 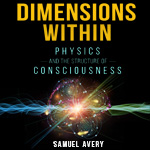 Dimensions Within: Physics and the Structure of Consciousness

Until recently we thought the world was made of space, time, and matter. We assumed consciousness was “inside” of ourselves, while the hard, cold, material world was “outside,” existing independently of life. Now, due to discoveries of relativity theory and quantum mechanics, we are not so sure.

In Dimensions Within, Avery shares the startling idea that thinking there is a world “out there” may be the wrong way around. Instead, all things are within consciousness. Using a model he calls the quantum Screen, he describes how the physical world may exist only to the extent that we perceive it.

Avery’s brilliant quantum Screen model opens a new world of exploration. It details the relationship between dimensions and Realms of consciousness – between space, time, and mass, and the five senses.Space and time may not be “out there” after all.  Avery believes they are “in here.” Consciousness is not in space-time; space-time is in consciousness.

This is no ordinary book. It contains written text, video and audio segments, and more than a dozen creatively animated videos to illustrate some of the enigmas of modern physics and to facilitate an understanding of the quantum Screen model.

This multimedia book is about much more than physics! It’s about us—about what we actually experience by being alive.

Samuel Avery holds a BA in Religion from Oberlin College and an MA from University of Kentucky. He has taught university courses in American History, European History, and American Government. He has practiced meditation daily for forty-three years.  Samuel has written a series of articles and books on the relationship of physics and consciousness to each other, including the books Buddha and the Quantum and The Dimensional Structure of Consciousness.