A Sense of the Cosmos 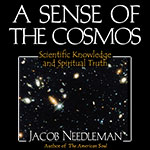 A Sense of the Cosmos: Scientific Knowledge and Spiritual Truth


Western science has operated for centuries on the assumption that we can understand the universe without understanding ourselves. We are just now seeking to make the necessary connection between the general laws of nature to those of our own (inner) nature. But the job won’t be done with “massive injections of the new consciousness;” we cannot democratize the sacred by cheapening its demands.

“My aim in this book,” says Needleman, “has not been to speak of the convergence of science and spirituality, but of their separation. As in nature itself, organic unity is a reciprocal relationship between separate but interdependent entities. In human life as well, there can be no real unity except through the awareness of real divisions. One may then hope to experience the magic power of sustained awareness by itself to bring the harmony that we have until now fruitlessly attempted to impose on ourselves and on our endangered civilization.”

“With this one compact statement, Jacob Needleman has forced the discussion of both science and religion in our time into a new, more mature and discriminating phase. . . . It is a way station where those who are seriously exploring the transformation of consciousness will have to stop, take thought, and perhaps re-plot their course.“—Theodore Roszak

“I want to strongly recommend it to every reader seriously interested in our present cultural situation.“—Fritjof Capra

Jacob Needleman is Professor of Philosophy at San Francisco State University, former Visiting Professor at Duxx Graduate School of Business Leadership in Monterrey, Mexico, and former Director of the Center for the study of New Religions at The Graduate Theological Union in Berkeley, California. He was educated in philosophy at Harvard, Yale and the University of Freiburg, Germany. He has also served as Research Associate at the Rockefeller Institute for Medical Research, as a Research Fellow at Union Theological Seminary, as Adjunct Professor of Medical Ethics at the University of California Medical School and as guest Professor of Religious Studies at the Sorbonne, Paris.

In addition to his teaching and writing, he serves as a consultant in the fields of business, psychology, education, medical ethics and philanthropy, and is increasingly well known as an organizer and moderator of conferences in these fields. He has been featured on Bill Moyers’ acclaimed PBS series, “A World of Ideas.”